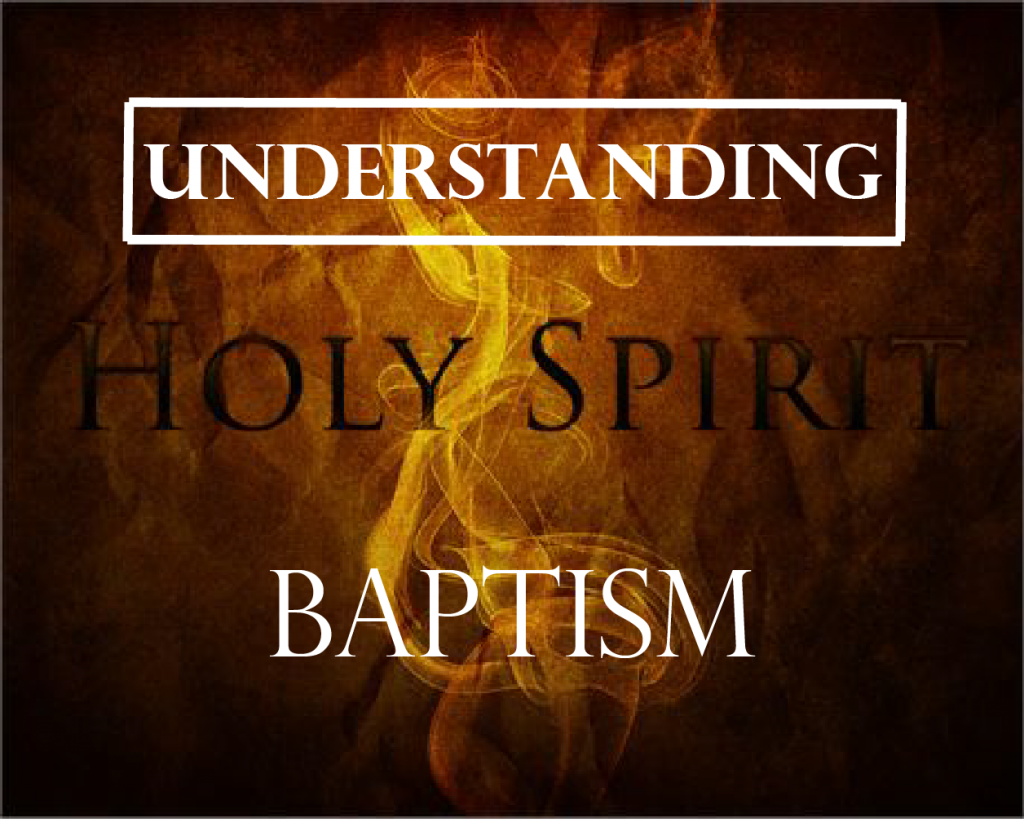 In Acts 1, verses 5 & 8, Jesus says “…in a few days you will be baptized with the Holy Spirit….. you will receive power when the Holy Spirit comes on you; and you will be my witnesses in Jerusalem, and in all Judea and Samaria, and to the ends of the earth.”  In the next chapter of Acts, the first sermon is preached, and the New Testament Church is started with more than 3000 members, as the direct  result of the initial fulfilment of this promise. Clearly then, this is what the Father has promised, and is the means by which this power from on high comes that releases the Christian into full service unto God.

Incidentally, the word translated “power”, comes from the Greek word “dunamis”, which means dynamic or power.

This is the Dynamic every Christian needs in their lives!  Have you received it yet?
Power at Pentecost

These promises had their initial fulfilment on the day of Pentecost, beginning  in Acts 2:4 “All of them were filled with the Holy Spirit and began to speak in other tongues  as the Spirit enabled them”

The sound of the people speaking out in these “other tongues” (the languages on men and Angels according to the apostle Paul in 1 Cor.13:1) drew a big crowd of curious onlookers, who wondered “What does this mean?” (Acts 2:12). So Peter, the disciple who had recently denied three times that he even knew Jesus for fear that he might be persecuted as a result, newly filled with the Holy Spirit and totally transformed by the experience, stood and preached fearlessly to the crowd about Jesus of Nazareth, of His crucifixion, burial an resurrection and ascension to the right hand of His Father in Heaven and explained that Christ had now sent forth the Holy Spirit exactly as He had promised. (Acts 2:14-36)  His sermon brought conviction upon the people, who cried out “Brothers, what shall we do?” Acts 2:37

But to whom does this promise apply?

“The promise is for you (those who stood before him)  and your children (the succeeding generations) and for all who are far off (in other places and countries)—for all whom the Lord our God will call (for all believers of all time).” Acts 2:39

He was explaining the experience the disciples had just undergone, which attracted the attention of the crowd in the first place; the coming of the Holy Spirit in power, and the disciples being released in speaking in tongues as the direct consequence and sign of what had just happened to them– the outward sign of the inward experience that drew the crowds to that place. Acts 2:33 “(Jesus) Exalted to the right hand of God, he has received from the Father the promised Holy Spirit and has poured out what you now see and hear.” So this was the experience Peter now assured his hearers was promised to all believers

As we have already seen  in Acts 2:4 “All of them were filled with the Holy Spirit and began to speak in other tongues  as the Spirit enabled them”

This is the first mention of believers speaking in tongues, and it comes immediately after the promised baptism in the Holy Spirit, which Peter later states is intended for all believers.

But is Holy Spirit baptism always accompanied by the sign of speaking in tongues? Lets examine the record in the book of Acts, the historical record of the early church, where there are five accounts of people receiving the Holy Spirit.  The other four are;

So it is apparent from these four accounts, plus the original in Acts 2:4, that of the five recorded accounts of believers receiving the baptism in the Holy Spirit, in four of them they are recoded as speaking in tongues, and in the fifth, it is strongly implied that they did.

What is Speaking in Tongues?

There are many opinions about what this is and what it’s purpose is, even to whether it was a sign just for the first generation of believers and not for the church today.  The best way to avoid misinformation and mistaken opinions, is to consult the only reliable source, the Holy Bible. The fundamental understanding is that all speaking in tongues comes “as the Spirit enabled them…” Acts 2:4

1 Corinthians chapter 14 has a great deal of information on it.

What does Holy Spirit Baptism do For the Believer?

Why Tongues and Not Just Our Native Language?

Born of the Spirit Verses Baptised in The Spirit

It must be understood that the baptism in the Holy Spirit is a separate and subsequent experience from salvation.  It is possible to be saved without ever being baptized in the Holy Spirit or speaking in tongues, but that is like having a licence to drive a truck, and having the truck parked outside and ready to go, but then choosing to move several tons of bricks one at a time by hand

If you have been “Born Again”, through turning away from deliberate sin, confessing that Jesus Christ is your Lord (supreme in authority), believing that his death and resurrection was for your salvation, and have turned from the practice of running your life to your own agendas, then you are certainly no stranger to the Holy Spirit. He indwells all those who have thus been saved, being a “deposit’, guaranteeing our eternal inheritance    Ephesians 1:14,     2 Corinthians 1:22.  The Holy Spirit comes to and lives within EVERY Born Again believer; Romans 8:9 “You, however, are not in the realm of the flesh but are in the realm of the Spirit, if indeed the Spirit of God lives in you. And if anyone does not have the Spirit of Christ, they do not belong to Christ.”. See also 1 Cor. 6:19, Eph.5:18, 1 Cor.2:12, Romans 8:11 etc.

It is from this aspect of our relationship to God, being born of the Spirit,  that we have Authority (Greek Exousia) over sin and the works of the enemy – the living reality that The King of Kings is resident within us by His Spirit, so we share His victory and His Kingly authority.

Like a policeman on Point Duty, directing traffic. He has put on the uniform that brings him authority to direct the movements of cars, we have “put on” Jesus Christ so that we have authority over the works of the Devil in our own lives, thus begins the process of being transformed day by day to more fully reflect the image of Christ – a lifelong process!

In John 20:21-23, we read “Again Jesus said, ‘Peace be with you! As the Father has sent me, I am sending you.’ 22 And with that he breathed on them and said, ‘Receive the Holy Spirit. 23 If you forgive anyone’s sins, their sins are forgiven; if you do not forgive them, they are not forgiven.’”  These disciples are undoubtedly Born Again, having received and recognised the Lordship of Jesus, and knowing fully all that He had just done for them (and for us!) And right now they are the first to receive the Holy Spirit. Beyond question, they have believed, are saved and they have received the Spirit, yet in Acts 1 Jesus commands these same men to wait in Jerusalem until they have been “clothed with power from on high”.

Exousia, authority is the essential foundation for a believers new life, but dunamis, power, adds a completely new dimension, and unlocks all the doors. Go back to our policeman who has authority, except now, imagine him inside an armoured car, armed with an AK47 rifle, at that same intersection! He now has not only authority, he also has  POWER to enforce it as well.

So it is with us!  We gain Authority when we are Born Again, but POWER over the enemy in all his forms to back it up when we are subsequently Baptised in the Holy Spirit.  From a ‘well of water’ within from which we can drink to slake our own thirst, John 4:14, 7:37,  to “rivers of living water flowing out” John 7:37 – More than we could ever drink – it’s a flow out unto the world to minister Christ to a parched people, and we simply cannot begin to serve God adequately without it!  Even Jesus Himself was baptised in the Holy Spirit at the commencement of His ministry, immediately after he was baptised in the Jordan river by John the Baptist;  Luke 3:22 “and the Holy Spirit descended on him in bodily form like a dove. And a voice came from heaven: ‘You are my Son, whom I love; with you I am well pleased.’ – how much more do we need to follow that example!

No wonder Jesus told His disciples to wait in Jerusalem until they had been baptised in the Holy Spirit! Look at the total transformation in them after Acts2: 4!

Have you had enough of sitting on the sidelines and watching life pass by?  Of praying prayers that remain unanswered?  Of struggling to maintain a grip on your faith?  Unable to really come to grips with the Bible and it’s teaching? Then it’s time for you to seek TODAY this precious gift that your Heavenly Father wants you to have! Power! Jesus Christ is God’s greatest gift to the world; but the Baptism in the Holy Spirit is Gods greatest gift to the church!  Don’t delay, ask your Heavenly Father for this priceless Gift, and seek out Spirit filled people who can join with you and lay hands upon you, that you might appropriate this fantastic experience yourself and be utterly transformed in your walk with God and your impact upon all whom you meet!